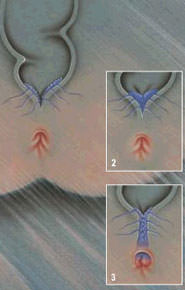 In the case of people who do not suffer from constipation, quite some years may pass before they are correctly diagnosed as suffering from the haemorrhoidal disease, up to advance stages, if they have no subjective symptoms. However, patients who do suffer from constipation go to the doctor early, because the bleeding worries them.

There are several theories explaining the causes of haemorrhoids, from the infectious etiology (cryptitis, haemorrhoidal phlebitis, colitis) up to neurologic and endocrine conditions. Some authors explain the occurrence of haemorrhoids as a consequence of diet (abuse of spices, alcohol and an unbalanced diet). The occurrence and prolapse of haemorrhoids may be favoured by several factors; hypodynamia, a sedentary lifestyle, obesity, constipation, pregnancy and childbirth, smoking, lifting weights, chronic coughing, abuse of alcohol and spices.

Haemorrhoids are diagnosed through anamnesis, the patient’s symptoms upon presentation, clinical signs, inspection, examination, videorectoscopy, which helps directly view the rectum. In order to exclude other causes of bleeding, the physician may examine the rectum and the lower area of the colon (sigmoid) through sigmoidoscopy or even examine the whole colon through colonoscopy. Sigmoidoscopy and colonoscopy are diagnosis procedures that exclude the possibility of more severe pathological lesions (colon cancer, polyps, colitis) accompanied by bleeding.

Haemorrhoid treatment with ointments, suppositories, teas is but an illusion. Even if it alleviates the symptoms and the bleeding stops, the haemorrhoidal disease continues to progress. HEMORRHOIDS DO NOT HEAL BY THEMSELVES or by drug treatment, which only temporarily relieves symptoms.

Rubber band ligation and IR photothermocoagulation continue to be the golden standard in the treatment of uncomplicated haemorrhoidal disease cases.

Laurus Medical’s proctologists are yearly updated on the medical advancements in the field of proctology, by constantly participating (and by publishing their own results), in the European Coloproctology and Rectal Cancer Congress held each year in Saint Gallen – Switzerland. The event yearly reunites more than 2000 proctologists coming from all over the world, to share their clinical experience. Laurus Medical’s team communications in this scientific event have always been widely appreciated due to the wide and varied cases (2000 to 5000 cases per study) and to the excellent results.

Rectorrhagia (anal bleeding) can also be the manifestation of another colon pathology, such as colon neoplasm (colon cancer) or inflammatory diseases. Rectal bleeding is the proof of an injury particularly originating in the lower area of the digestive tract (colon, rectum, anus), but which can also be located in its upper area (duodenal ulcer, for instance) in the case of massive haemorrhages. That is why in Laurus Medical Clinics, in order to make sure that the diagnosis is the correct one, in addition to the rectal examination, we also perform the videoanoscopy, the computed videorectosigmoidoscopy and the colonoscopy if the bleeding source is not identified.