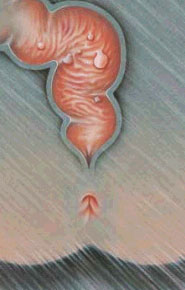 What Are Colon Polyps?

Colon Polyps are benign epithelial formations. The causes of colon polyps have not been clearly elucidated so far. It is, however, widely acknowledged that chronic inflammatory diseases favour the ageing of the colon mucous membrane epithelium, with the appearance of benign neoformations on the mucous membrane.

The colon mucous membrane epithelial cells are normally often replaced (by exfoliation), which helps prevent the aggressions of the external environmental harmful factors – such as carcinogenic agents.

The perturbation of the colon mucous membrane regeneration process can cause polyps. There is a theory according to which they stem from high development potential embryonic buds. The genetic predisposition is also mentioned.

Tubular polyps are small, but they rarely exceed 1 cm in diameter, they are pediculated with a well-organized structure and smooth surface.

Tubulovillous polyps are a form of transition, with a shorter lobe and a less smooth surface than in the case of the tubular ones.

Villous polyps are large soft consistency formations, with a diameter above 1 cm, but in 50% of the cases they exceed 3 cm, bleeding slightly upon touch.

In children and young people juvenile polyps may occur. They are part of tumours stemming from the embryonic tissue residues, they most often are solitary, with sizes of up to 5 cm, with a long lobe, sometimes cluster-shaped, smooth or lobulated, covered in a glossy mucous membrane.

The larger the number of polyps identified in a person, the higher their subsequent malignancy transformation risk. If up to 100 polyps are identified, we are talking about multiple polyposis, for more than 100 polyps identified – diffuse colon polyposis or familial adenomatous polyposis. Adenomatous polyposis is a hereditary disease characterized by the appearance of a large number of colon polyps, with a high subsequent malignancy risk.

The number of polyps increases with the age. People suffering from familial adenomatous polyposis are exposed to a 100% risk of developing colon cancer at a certain point. The disease is transmitted on the basis of the dominating gene principle and 50% of the descendants are exposed to the risk of developing it. Hence, in the case of children with familial adenomatous polyposis risk, screening tests, rectosigmoidoscopy or repeated colonoscopy are recommended, starting the age of 10-12.

In most cases, colon polyps have no clinical symptoms and they are identified by chance, as part of endoscopy investigations performed for the exploration of other pathologies. In more than 75% of the cases, polyps are identified in people aged above 50. Polyps above 1.5-2 cm may cause mild pain in the hypogastrium during and after defecation, mucus or blood discharges, rarely intestinal obstruction caused by invagination or the intestinal lumen obstruction.

How Are Colon Polyps Treated?

The conservative colon polyp treatment is inefficient. All polyps identified during the rectosigmoidoscopy or colonoscopy needs to be excised and histopathologically investigated. Polypectomy is performed during colonoscopy, with the help of a loop connected to the electrocautery device, inserted through the colonoscope. Large polyps are removed through repeated sectioning.

Familial adenomatous polyposis is treated through repeated endoscopic polypectomies and in severe cases, total colectomy may be required. Because it is a precancerous lesion, after the removal of polyps, regular follow-up visits of the patients are required (colonoscopy). The early identification and resection of asymptomatic polyps is one of the most important colon cancer prevention methods.